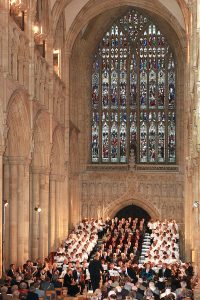 Beverley Minster watches over its town with magnificence and grandeur. The Minster is an active place of worship and has a musical history with a 200 year old organ and a choral tradition dating back to the 16th century.

The Minster is a musical venue with regular performances from its own choir as well as the East Riding County Choir. A choral group, 150 strong, with an amazing sound to move any listener, whether or not they are of the Christian faith. The choir has been making music for 50 years, celebrating its ½ century with a concert of Elgar’s “The Dream of Gerontius” under musical direction of Dr Alan Spedding of Beverley Minster. In need of a system to enhance the choirs performance, whilst being considerate to the surroundings, the Minster turned to Stage Systems.

The choristers were raised to new heights metaphorically through their performance and literally by the aid of their new tiering system! The system enables the group to be raised in graduations so that the full mixture of voices can be projected throughout the Minster. The tiering is Q-Plus, an original design from Stage Systems and combines strength and versatility with ease of use and practicality.

Funded by the Lottery, and as part of the grant condition the Choir’s tiering is also hired out to local groups, societies and events including Beverley & East Riding Early Music Festival, Beverly Folk Festival, The Beverley Chamber Choir, The Royal British Legion, local schools and Beverley Minster. Hayley Westenra will be including Beverley Minster in her current tour, promoting it as an adaptable venue with amazing acoustics. Each performance that utilises Q-Plus illustrates its versatility, it can be used in a variety of configurations, all of which are easy to create and take apart, but have phenomenal structural strength.

“From individual chorister up to full choir group, Q-Plus presents the perfect platform for any type of musical spectacular. Easy to assemble and dismantle the Q-Plus system fits simply into the Minster, so is put up the night before and taken down after the performance, which as Neil MacLachlan of the choir states ‘is the joy of this first class system’”.

Thank you so much for the swift delivery of the staging we ordered. I was so impressed with the service you offered us - a huge thank you for getting it to us before you promised!